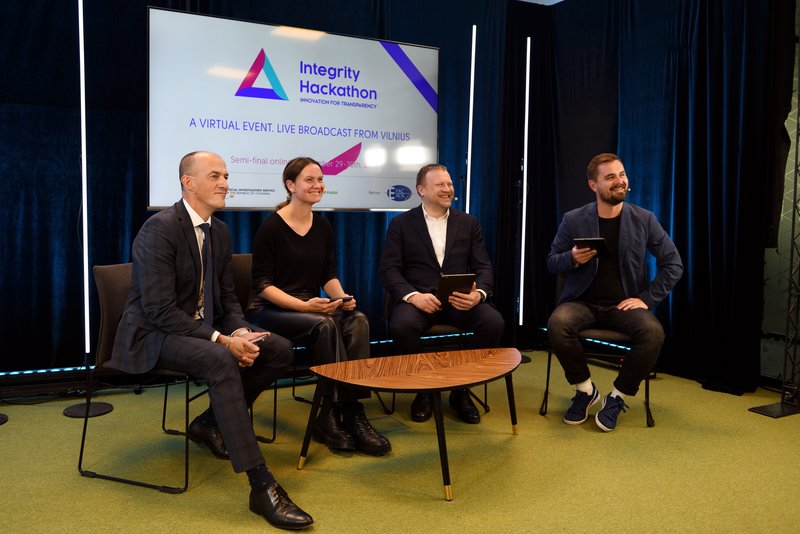 On September 29-30, semifinals of the first "Integrity Hackathon" organized by the Lithuanian Special Investigation Service (Specialiųjų tyrimų tarnyba, STT), Vilnius city heating company (Vilniaus šilumos tinklai, VŠT) and European partners against corruption and European contact point network (EPAC/EACN) took place. Three teams were chosen as finalists: two from Lithuania and one from Ukraine. From the application of a model based on cognitive search principles in the selection of digitization projects to augmented reality initiatives for anti-corruption public awareness, such ideas will compete for the title of winner on November 11th in Vilnius.

13 teams competed in the semifinals

The international anti-corruption hackathon "Integrity Hackathon" is organized to contribute to the solution of European transparency challenges. The semifinals of the event brought together transparency enthusiasts and professionals from different fields. 13 teams participated, whose members represented 6 countries: experts from Lithuania, Ukraine, Azerbaijan, Moldova, Romania and Brazil generated ideas at the hackathon.

According to the Director of the STT, EPAC/EACN president Žydrūnas Bartkus, active involvement of the teams shows the relevance and importance of the topic.

"With this international hackathon, we are glad that transparency enthusiasts from different countries of the world responded. Congratulations to all the teams that participated and particular greetings are for those who made it to the final. Hackathon teams provided many innovative and interesting ideas that could be implemented both in Lithuania and in other European countries. Such an anti-corruption hackathon format and tangible proposals by the teams can significantly contribute to the creation of a transparent environment throughout Europe," says the Head of the STT, EPAC/EACN president Žydrūnas Bartkus.

Teams consisting of 3 to 5 people solved one of the seven challenges presented. Their work, which lasted two days, together with assigned experts-mentors in their fields, was introduced in virtual presentations to the panel of judges. Each team had to create a video that briefly presented the proposed idea, and after the demonstration of the videos, they were given 3 minutes to answer the panel's questions.

The international panel selected three of the most innovative ideas

The team "Faircheck" tackled the challenge of transparent investments and proposed an innovation in the field of digital transparency that could make the expert evaluation of administered digitization projects more efficient not only in the public sector, but also in the private sector. The developed solution can speed up, make transparent, simplify the software expert evaluation process and reduce its cost as well as make it possible to obtain an unbiased conclusion not only for controlling authorities, but also for software developers and customers. If implemented in practice, it can become a digital advisor of sorts, helping to understand and transparently evaluate the confusing IT field.

The Ukrainian NABU team proposed an augmented reality project idea aimed at raising public awareness on integrity and anti-corruption. The team proposed to use the most advanced technologies, emphasizing the eroding impact of corruption on public welfare and highlighting the negative consequences it has for every person. The suggested form of the project is a series of augmented reality photo posters "Before - After". Each poster would represent a particular problem caused by corruption - environmental issues, poor education, corruption in healthcare, etc. After downloading the anti-corruption augmented reality mobile application, people could see how certain places would look differently if corruption was not tackled.

The team "Vilniaus vystymo kompanija" sought solving the challenge of the employee resistance barometer. The goal of the team is to create a tool that will help any organization to select the most suitable candidate, using a flexible and practical tool based on the principles of neuro-linguistic programming. The tool offered by "Vilniaus vystymo kompanija" would help any organization to choose the most suitable candidate who would meet the level of integrity and values of the company.

The finalists will continue to work and develop prototypes of presented ideas. They need to analyze the economic, social and political factors of the environment that could impact the implementation of their ideas and demonstrate practical usability for further project realization in future. The teams will present the developed projects and progress of their work at the finals of the "Integrity Hackathon", which will take place on November 11th in Vilnius.

The winning team will be awarded the prize of EUR 15,000 worth of their selected distance learning courses at prestigious world universities.

The final event will be broadcasted live and anyone interested in innovations in the field of creating an anti-corruption environment will have the possibility to watch it on STT's YouTube channel. 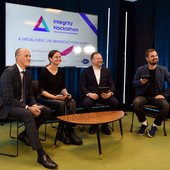 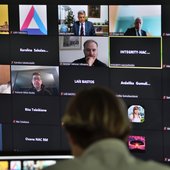 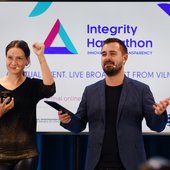