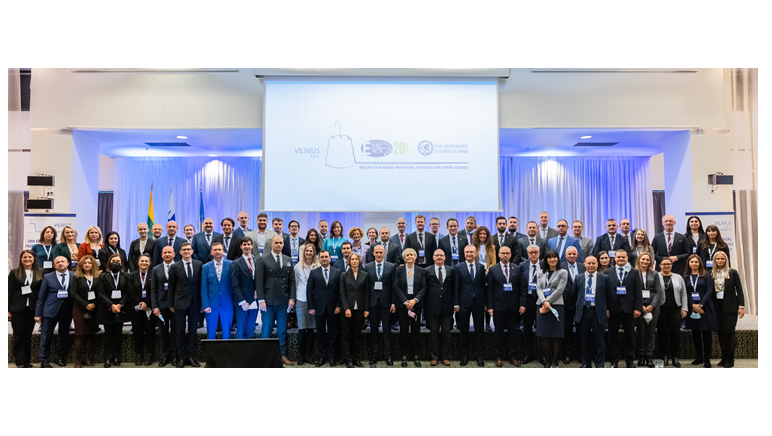 On 1 and 2 December 2021, the 20th Annual Professional Conference and General Assembly of the European Partners against Corruption (EPAC) and European contact-point network against corruption (EACN) took place in Vilnius. The conference, marking the 20th anniversary of EPAC, saw the adoption of the Vilnius Declaration and the election of a new EPAC/EACN Board with its new President, Mr Žydrūnas Bartkus, Director of the Special Investigation Service of the Republic of Lithuania (STT).

The EPAC/EACN conference, held in Lithuania for the first time, was organised by the STT. About 120 participants from 54 institutions and 30 different countries took part in this hybrid (on site in Vilnius and virtual) event.

In his opening speech, the new President Žydrūnas Bartkus emphasized, inter alia, “…that corruption remains one of the threats to national security and that an effective fight against it requires a systemic response.” The conference continued with presentations by representatives of the European Commission's DG Home, the European Public Prosecutor's Office, the OECD and national anti-corruption and police oversight institutions. The Austrian Federal Bureau of Anti-Corruption (BAK) presented the results of the EPAC/EACN Working Group “EU Integrity”.

On the second day of the event, there was a lively panel discussion to “re-think corruption and police oversight”. Furthermore, participants discussed the concept of corruption as well as the role and priority accorded to anti-corruption activities in the political agenda of democracies over the next 20 years.

Another item on the conference agenda was the EPAC/EACN award for the most innovative anti-corruption initiative. This year's award was won by the Regional Anti-Corruption Initiative (RAI) for its regional campaign on whistleblowing "Break the Silence: Whistle for the End".

At the general assembly, a new EPAC/EACN Board was elected:

In addition, the Vilnius Declaration, the final conference document, was adopted by the general assembly. Addressing the members of the network, i.e. anti-corruption and police oversight bodies, as well as European national governments, European Union institutions and international organisations, it proposes various actions to enhance the fight against corruption. The declaration contributes to achieving EPAC/EACN’s general aim of strengthening cooperation and the exchange of good practices in the fields of anti-corruption and police oversight.

Two new members have joined EPAC/EACN: the requests for membership of the Slovak National Security Authority (NBU) and the French Central Office for the Fight against Corruption, Financial and Tax Offences (OCLCIFF) were approved by the general assembly. Now, 100 anti-corruption and police oversight bodies from 38 European countries are members of EPAC and/or EACN.

Last but not least, topics for future working groups were discussed. The following proposals were made: 1) Reviewing the guiding principles of EPAC/EACN on the basis of the findings of the “EU Integrity” working group; 2) Comparative survey of skills and remits of POBs, 3) Survey of international technical and legal reference documents for law enforcement and police operations; and 4) Forced return and forced return operations.

Particular thanks were expressed to Ms Monique Stirn, Inspector General of the Police, Luxembourg Ministry of Internal Security, who served as Acting President of EPAC/EACN in 2020 and 2021.